Freelance Writer Contracts: Should You Have an Agreement?

When you're looking to pick up a freelance writer to do some work for you – whether it's product descriptions, blog posts, landing page copy, white papers, eBooks, or something else entirely – chances are the discussion of a contract will come up.

Should you have a contract? Will the writer expect or demand one? What should be in it? Let's discuss.

First, though, a brief disclaimer: we're not lawyers. Anything below is not official legal advice. If you want actual legal advice, consult with a contract lawyer.

Should You Have a Freelance Writer Contract?

In the vast majority of cases, the answer to this is yes.

Contracts exist to be an enforceable framework of an agreement between two parties. On your end, you promise to pay the writer for their services appropriately and on time. On their end, they promise to deliver work on time and within the acceptable scope of the project.

Other aspects of the agreement can be covered in the contract as well. These can include timelines, other deliverables, management of rights, and more. We'll get into that more in a bit. 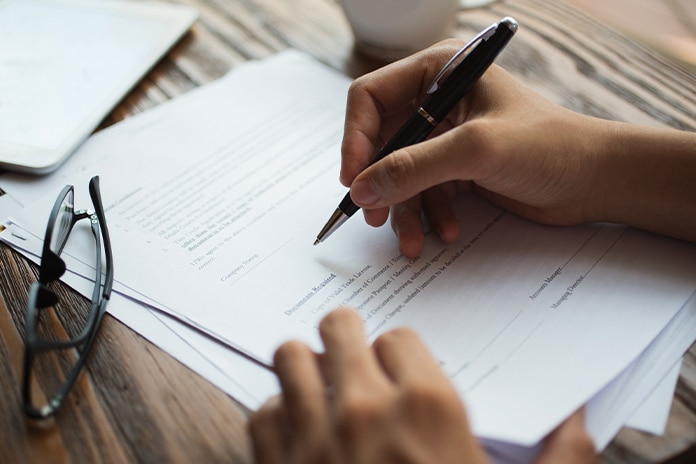 "But we're trustworthy, we have dozens of testimonials from previous freelancers, we don't really need a contract…"

Freelance writers are very often the subject of scams or exploitation. They're generally on their own, they don't have clout or weight in the industry, and they're often low-paid workers. That all makes them excellent targets for scammers to exploit them. Every freelance writer has a horror story or six about a company that demanded work and never paid for it.

Contracts protect the writer, which is why a majority of writers will demand a contract be signed before they begin work. Many will even require the contract to be signed, even for a test post. After all, companies asking for a test post and then never picking up the writer for more work is a common scam too.

We're not saying that your company is going to scam or exploit writers. The tragic fact is that writers are so often exploited that a contract is one of the only ways they have to protect themselves.

What Are the Benefits of a Freelance Writer Contract?

First, you codify the transfer of rights to the content you buy. When you're paying a writer for content, the general expectation is that they sign over the rights to that content, so you can do what you want with it. The writer also can't use it elsewhere. Sites like Constant Content even allow writers to sell their work with varying rights attached, including non-exclusive rights, though that's rarely used anymore.

Without a contract, you only have a verbal agreement of rights transferal, or worse, none at all. If it comes up in dispute – like the writer publishes it in their portfolio or tries to sell it elsewhere – you have no grounds to stand on.

Second, a contract can codify an NDA. Some companies don't want it to be known that they aren't producing their own content. Without the NDA clause, the writer could list you as a client on their portfolio, and again, you would have no recourse but to ask them to remove it. 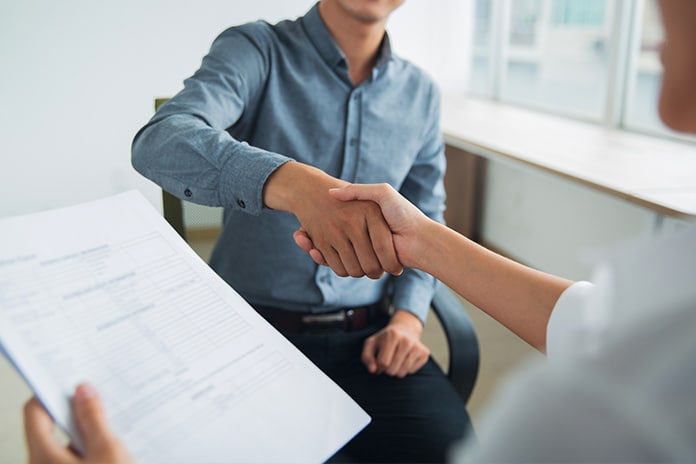 Third, the contract guarantees that you receive the work you pay for or have the money returned if there's an advance, and that you get however many revisions you agree upon.

Fourth, of course, a contract gives you legal rights to pursue if there's a breach of contract. Sometimes, bad things happen, and you may need to go after a writer for breach. Of course, it's much more common the other way around.

Finally, writers will feel more comfortable and confident working with you if there's a contract backing them. Even if you're never anywhere near pushing the borders of what is defined in the contract, the contract offers peace of mind.

Who Provides the Freelance Writer Contract?

As a business looking to contract with a freelance writer, should you have the contract on hand? Or should you expect the writer to have one they use? Or, should you mutually produce one to your combined satisfaction?

The answer really can vary.

Writers who have a lot of different clients probably have their own contract, or at least a template thereof, that they can customize for your needs and your business. It will have common clauses and a framework of data that can be filled in to specify things like the deadline of a piece, the number of revisions allowed, the scope of a piece, and so on.

On the other hand, businesses that work with many different writers might want to have one standardized contract that all their writers use. This relieves much of the administrative burden on the business and ensures that each of its writers are treated equally.

In most cases – especially if you're only working with one writer, or this is your first writer – you'll probably have some leeway to negotiate terms. It's rare that a writer will be so fixed in their process that they don't offer any flexibility at all.

Many writers prefer to bring their own contract to the table simply because they may have paid a lawyer for it, and that can get pricy, so they want to use it. That, and they're familiar with it, whereas if they have to read and understand your contract, they risk misinterpreting it.

What Goes Into a Freelance Writer Contract?

When you think of contracts, you likely think of multi-page-long documents full of impenetrable legalese. The truth is, that's not generally necessary, but is a natural evolution of a contract over time.

What happens is that two entities will start with a basic, usually plain-language contract. Over time, one side or the other (or a third party using the same contract) will find a loophole and exploit it, and the original entity will need to add a new clause to prevent it. This goes on and on, for years or decades, until you end up with massive, airtight, but extremely complex contracts.

Then you have people arguing that it's mostly unnecessary, slashing regulations, and a rediscovery of the loopholes they were meant to prevent, starting the process all over again. This is why things like industrial regulations and the tax code are so complex; it's been going on for hundreds of years.

For a basic to intermediate-level freelance writing contract, you want to include the key points. Whether you do it in 1-2 sentences or in 2-3 paragraphs depends on your preferences as much as anything. Here's what those key points are: 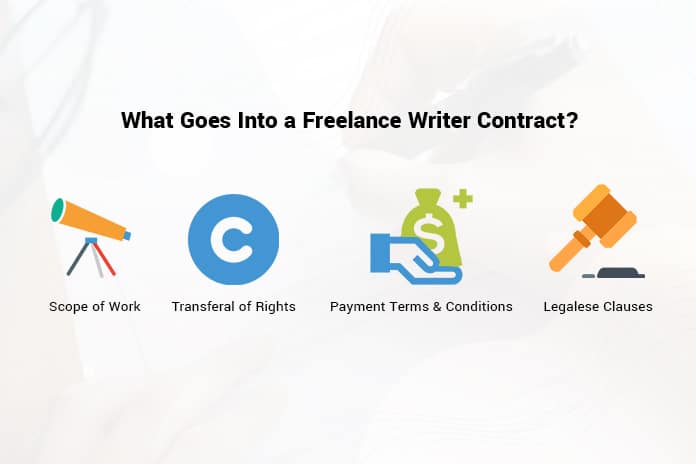 The scope of work is the most customizable part of the contract. It generally lays out things like the type of project, the duration of the project, the length of the project, and anything else that needs to be pinned down. It may also include a fixed number of revisions, or a percentage of content that can be changed in each revision (to avoid exploitation via revision), deadlines for revisions, and other details.

Scope of work is important to avoid a single project ballooning into something much greater without increased compensation. Generally, the scope of work will have some way to expand the scope of a project for an additional fee, or it may be baked in; if the writer is charging per-word, they may leave it entirely open for how many words a project can have since the more you demand, the more they earn.

The scope of work section can be divided into other sections, or it might include information about revisions and deadlines as well. Some writers prefer this to be lumped together, while others divide them into discrete chunks for individual negotiation.

There's a ton of potential depth to this. What if your eBook gets interest and a studio wants to turn it into a movie; do you have movie rights? What if you want to submit the piece to a magazine; do you have publication rights? Some contracts are a broad all-rights-to-the-buyer, while others are limited rights to publication on the web only.

Of course, for something simple like blog posts, product descriptions, or landing page copy, this is rarely a concern. Rights negotiation becomes much more complex with works of fiction.

For ongoing projects, longer projects, or larger projects, this can be more complex. An eBook might have an advance and payments per chapter. Ongoing work might pay monthly or even weekly. It all varies and can be negotiated.

This section can also include severance and cancellation clauses, where the writer still gets paid something for rejected work, though this is often more common for large projects.

Additionally, this section might include how the writer is paid. If they only accept direct deposit, or can only work through PayPal, or they prefer Venmo or something, it can be included in the contract.

Other details that can go into this section can include what to do if a writer needs to buy a resource for your project, or scaled pricing for different levels of rights transferal, and anything else the writer has been burned on before.

Contracts often have some chaff in them that is important from a legal standpoint but isn't really subject to negotiation and is just boilerplate. This can include stuff like:

This all varies from writer to writer. Some is just templated, and some comes from direct experience in getting burned before.

How to Produce a Freelance Writer Contract

There are three ways to produce a freelance writer contract, either on your own, with the writer, or as a writer.

The first is to write it yourself. This is fine for simple, largely informal agreements and as a formality, but it's not really advised once you're getting into higher dollar amounts or working with larger businesses or more prominent writers (depending on which side of the coin you're on.) 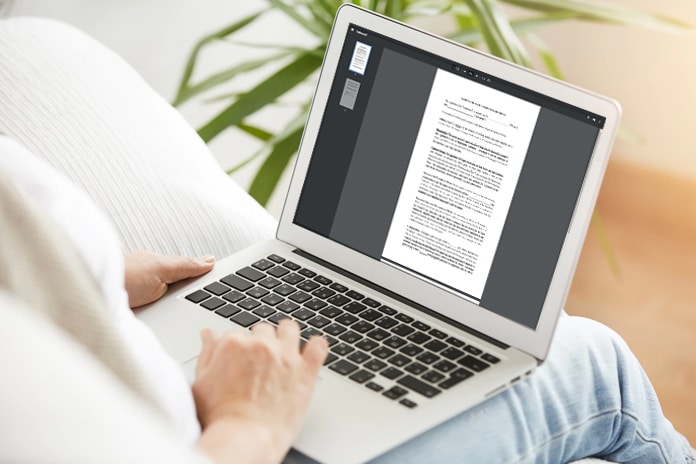 The second is to hire an attorney to write one for you. Contract lawyers offer these services, and while it can be expensive, it's usually a one-time expense for the attorney to produce something that can be reused across many different contractors.

The third is to use a template from the internet. You can often find templates like this one, or sites like RocketLawyer that will ask a few questions and produce a more customized contract. This option is easy but may need review and customization to get it right.

Either way, the answer is clear: you should always have a contract, both for your sake and for the sake of your writers.

The only question is what's in it and how you go about producing it. 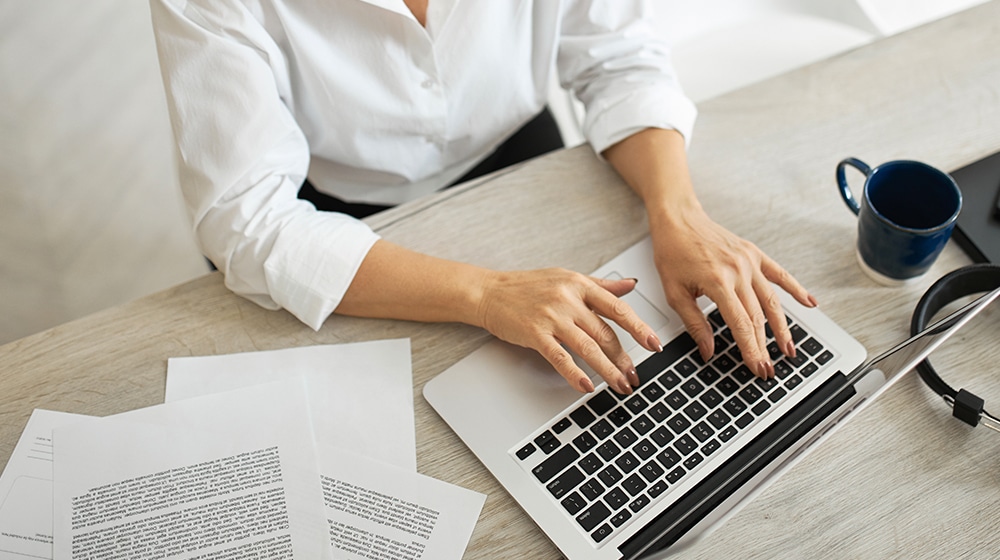 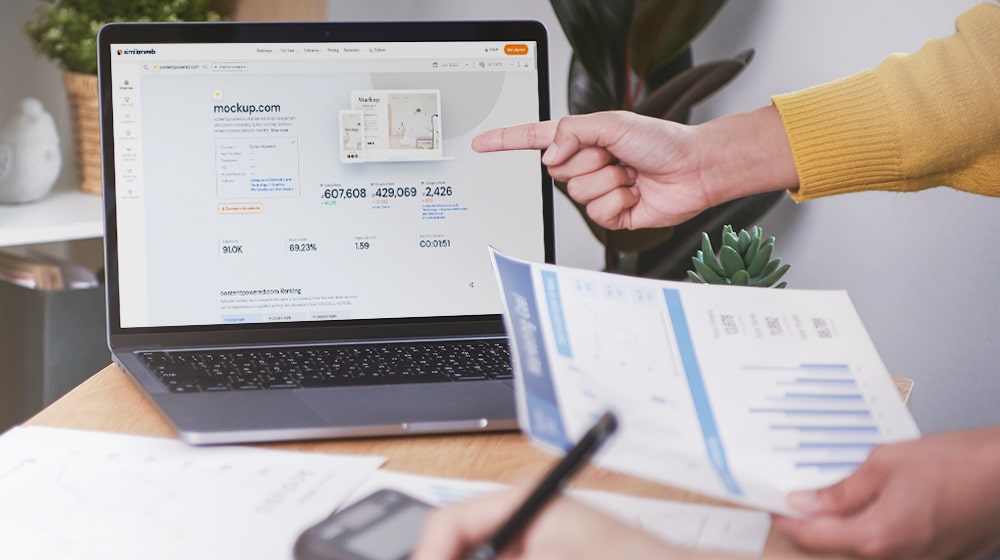 20 Proven Strategies to Get More Traffic to Your Website
Learn More ...